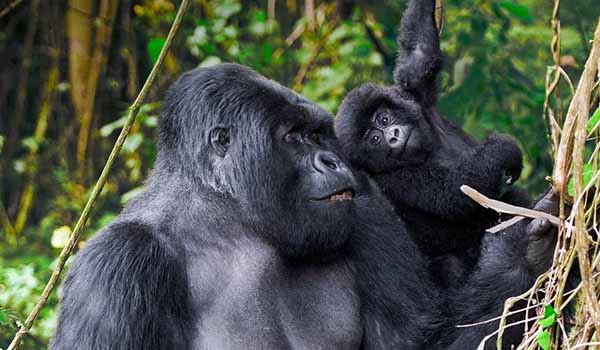 Best Places to See Gorillas in Uganda, Rwanda and Congo

Still curious about the best parks to trek gorillas? This blog will guide on where to see mountain gorillas in Uganda, Rwanda or the lowland gorillas in Congo.

Emotional and physical preparations lead travelers through narrow and unclear forest trails in the lush Tropical rainforests of Africa, jumping streams, falling from muddy and slippery hilly slopes while wiping sweat from eyes as well as feeling thankful for the hiking boots.

With trackers moving ahead to scout the jungle for the location of the habituated gorilla family and informing the Ranger guide leading your group, the Giant Apes will be found after 1-5 hours of hectic and strenuous walks. Move slowly and steadily with nothing but your binoculars, camera, daypack and the enthusiasm as well as high expectation of thrilling experiences.

There are only four gorilla sub-species that live in the Tropical rainforests of Africa, some of which are endangered while others critically endangered. Finding these outstanding creatures in the Continent’s raw and untouched rainforests as well as watching their day-to-day routines is one of the greatest opportunities of a lifetime.

Get the chance to see mother gorillas tenderly breastfeed and show care to their young ones while being conscious of the stern stare from the huge silverback who keep a defensive eye over his family/group. Meeting face to face with a close relation is an intimate experience that makes trekking and spending quality time with gorillas in the wild an inspiring and life-changing encounter.

Given the enthusiasm and high expectation of seeing these Great Apes in the wild, we bring you the best places to see gorillas and they include;

Uganda shelters the mountain gorillas, sub-species of Eastern gorillas and these live in two places- Bwindi Impenetrable National Park and Mgahinga Gorilla National Park. Daily visiting of each gorilla family is limited to 8 persons for each of the 22 gorilla families in both Gorilla Parks. For this, booking for gorilla safaris in Uganda should be done about 3-6 months in advance

Gorillas in Uganda – Bwindi National Park shelters about 450 of the 1080 mountain gorillas in the wild living in tangled lush vegetation within the south-western mountains of the country. The Park is about 8-9 hours’ drive from Kampala City or a quick 1h20m to 1h40m flight from Entebbe International Airport or Kajjansi Airstrip.

This UNESCO World Heritage Site is also have to over 120 mammal species, about 350 bird species, 200 butterfly species, reptiles and Amphibians. Thanks to revenue from gorilla tourism, the mountain gorilla population is growing steadily. While the mountain gorillas are the main highlight of this Park, there are also rare encounters of chimpanzees, Olive baboons, black and white colobus monkeys and L’Hoests monkeys during gorilla trekking tours in Bwindi National Park.

The Price for gorilla trekking permits in Uganda cost only $700 per person, $600 and Shs. 250,000 for the foreign non-resident visitors, foreign resident travellers and East African visitors respectively. Travellers can opt for the Gorilla Habituation Experience at $1500 per person for more time (four hours) with mountain gorillas instead of one hour during standard gorilla treks.

Another amazing place to see gorillas in the Wild, Rwanda is a small land-locked country that punches above its weight and size in unstoppable wildlife encounters. Situated in the north-west is its flagship Safari destination (Volcanoes National Park), about 3 hours’ drive/116 kilometers from Kigali City.

The spectacular Volcanoes National Park covers only 16000 hectares of tropical rainforest and bamboo forest, also comprising of five Virunga Volcanoes. The mountain gorillas are sociable primates that live in groups of five to over twenty individuals.

While there are over 40 gorilla families here, only about 12 are fully habituated and open for trekking by visitors. Travelers are guided by expert Ranger guides who follow guidance from Trackers. This Park is also popular for being the base for primatologist Dian Fossey who pioneered gorilla studies and monitoring.

Gorilla permits cost $1500 per person in this country and for every 10% paid goes into community development as a way of appreciating the involvement of rural communities in conserving these endangered Giant Apes.

The Democratic Republic of Congo offers the most remarkable gorilla trekking experiences you will ever think of, with both sub-species of Eastern Gorillas (the mountain gorillas and Eastern lowland gorillas). These Great Ape species are found in Virunga National Park and Kahuzi-Biega National Park.

The latter is about 600,000 hectares in the East of the country with about 5 habituated families/groups of Eastern lowland gorillas. On total, there are about 300 of the 5000 individuals in the entire World and this is obviously the best place to see them in the wild.

For the mountain gorillas, they are about 200 individuals in Virunga National Park, with 8 habituated groups to look-out for. In total, 64 gorilla permits are issued each day for this wonderful Eastern-based Protected Area. Gorilla trekking permits for both Parks cost $400 per person per trek, making it the cheaper option to Uganda and Rwanda.

We introduce the Central African Republic for travellers looking for a rawer and wilder place to see gorillas in the wild. In this country, several groups of western lowland gorillas were habituated within Dzanga-Sangha Special Reserve, part of the Sangha Trinational Reserve (a UNESCO World Heritage Site in north-western basic of River Congo). You need to be physical fit and resilient to walk through this untouched Reserve to explore its Tropical rainforests extending across Congo and Cameroon.

Dzanga-Sangha shelters the highest concentration of Western lowland gorillas as well as forest elephants in this country. However, unlike the first three countries that have well-developed gorilla tourism, travelers to Central African Republic should be ready to endure with the endless challenges of getting to the Protected Area but the reward is greater than you can ever imagine.

The Republic of Congo (Congo Brazzaville)

This country shouldn’t be confused for the Democratic Republic of Congo and offers extraordinary trekking experiences. Visitors walk from Safari Camps straight to the verdant forest in the company of trained Ranger guides to search for habituated gorillas, which is different from Uganda and Rwanda where participants first undertake road transfers to the Parks.

This country has flatter and more favorable terrains as well as low elevations than Rwanda, Uganda and Democratic Republic of Congo where mountain gorillas are found. The 5200-square kilometer Odzala-Kokoua National Park is the best safari destination to trek western lowland gorillas in tranquil Equatorial rainforest.

Besides western lowland gorillas, it would interest you to know that this Park is haven to over 100 mammal species in addition to being the wealthiest primate destination. Gorilla trekking permits for this country cost $350 per person and should be booked several months before the trekking date.

Best time of the year to see Gorillas

The different gorilla species are found in several countries, with outstanding month-by-month weather variations. However, the rule of thumb is that the dry season provides the more favorable and less challenging conditions (drier forest paths and floors) for searching these Giant Apes in their different natural habitats.