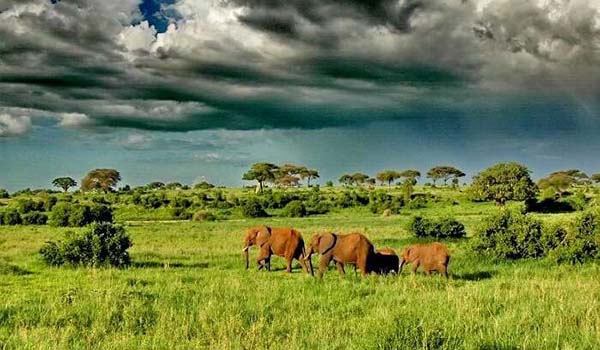 In most cases, the best time to visit Tanzania is determined by factors such as the activities a tourist intends to do or wildlife he or she wishes to see while on Tanzania safaris.

Tanzania is entirely an all-year-round travel destination though the dry season is considered to be the best time to travel to this beautiful African safari destination. That is from June, July, August, September to early October or visit Tanzania from December, January to early March.

During the 2 phases of dry season, tourists on Tanzania safaris are guaranteed of high wildlife visibility. Also, if your intention is to witness the wildebeest migration or calving, the dry season still plays an important part. Wildebeest calving season often falls in the months of January and February.

Most Tanzania safari destinations become wet/muddy making it challenging navigating through game tracks to search for wildlife during the wet or rainy season. The wet months of the year in Tanzania are April, May and November, though they are the best months to enjoy the lush vegetation of Tanzania or sight migratory birds in their thousands.

It should be noted that Tanzania experiences a tropical climatic conditions and these differ depending on the region and elevation. The coastal area of Tanzania is hot and humid unlike the low lying regions that are drier and cool. When planning for Tanzania safari, it is essential to put into consideration the two seasons- dry and wet season.

Visit Tanzania during the off/low or wet season

Visiting Tanzania safari parks at the start of wet season is of great advantage to some nature lovers. To most visitors, between peak and low season, higher chances are tourists can still enjoy excellent view of wildlife due to short grass and rains don’t begin falling heavily.

Tanzania safaris during the green season

Green season often occurs between or after rains and it is a favorite time on its own when it comes to Tanzania safaris. It is during this period when there is plenty of water on the surface flowing from rivers and existing waterholes.

During this period, most wildlife especially grazers- zebras, wildebeests, giraffes etc take advantage of the fresh grass to feed on making it ideal period to keep an eye on most of them as they forage.

When is the best time for Tanzania safaris?

The dry season is amazingly the best time to go Tanzania safaris. Explore diversity of wildlife in savanna parks of Tanzania from June till October or June to July for mesmerizing wildebeest migration experience or visit Serengeti National Park from January to February, an ideal birthing season for wildebeests.

Most of Southern and Western circuit protected areas are excellent explored during the dry season.

Visit Tanzania as per weather

Tanzania enjoys conducive weather conditions with the rainy season experienced from March, April and May. The daily temperatures on the other hand often decrease as low as 30 degrees with high humidity.

During the long dry season, rains are minimal or aren’t experiences regardless of location whether it is an island or not. It is generally sunny and the sky clear during the dry season.

Visiting Tanzania by months of the year

What to pack for Tanzania safari holidays?

Best places to visit in Tanzania for a safari

Top historic and cultural places to explore on Tanzania safaris include Stone Town in Zanzibar (a UNESCO World Heritage Site and a major attraction in Zanzibar-Tanzania) with several sites to be visited including museums, ancient buildings, memorial centers. The national museum and house of culture in Dar-es-Salaam, Askari Monument, Village Museum.

Activities to do in Tanzania- East Africa

Tanzania has plenty of unforgettable safari activities/experiences for every traveler to be part. These range from nature/wildlife, cultural to hiking/mountaineering experiences and they include wildebeest migration experience offered at Serengeti National Park; big five game safaris or wildlife viewing, camping safaris, mountaineering, beach holiday at Zanzibar, scuba diving.

Others include hot air balloon safaris, explore Stone town, chimpanzee encounters, marvel at the rift valley, explore olduvai gorge, birding and many others.