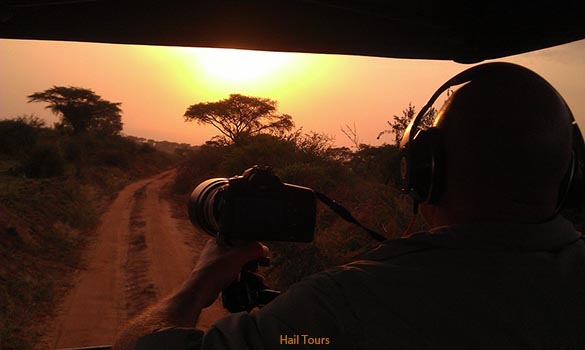 Uganda experiences a tropical kind of climate, however, the climatic or weather conditions vary from on region to another. Temperatures are often drop in the high-altitude areas such as Mount Rwenzori and Mount Elgon.

The best time to visit Uganda by season of the year

Most parts of Uganda record an average rainfall amount of up to 1000-2000mm though the wet/rainy season and duration do vary depending on the region. Long rains are often experienced starting from March, April, May and shorter rains in Uganda begin from October to November.

During the wet or rainy months of the year, it can rain but briefly then the sun comes hence allowing tourists on Uganda safaris to proceed with their normal activities. Higher humidity is experienced mostly in the Lake Victoria basin with rains received almost all year round. Humidity reduces significantly in other parts of Uganda.

The dry season in most parts of Uganda begins from June, July, August, September- this is considered to be the long dry season and shorter dry season starts from December, January, February. These come with favorable weather conditions perfect for visitors who are on Uganda safaris in Bwindi Impenetrable National Park or Mgahinga Gorilla National Park for gorilla trekking or Kibale National Park for chimpanzee tracking.

When planning your Uganda safari, take note of the season. The long wet/rainy season runs from March, April to May; short rainy/wet months run from October to November while the dry months include June, July, August to September; December, January to February.

Game spotting in National Parks in Uganda is ideal from dry season when a huge profusion of wildlife can clearly be sighted. In every season, temperatures do vary- rising from 24 to 30 Degrees Celsius. If you are interested in birding/bird watching, Uganda is an all year-round birding safari destination.

June, July, August/December, January to February are the best months of the year to visit all Uganda National Parks. June, July, August to September are peak months of the year and if you plan to visit Uganda for gorilla trekking, then you should have your gorilla permit booked early. The low season- March, April, May or October to November, most Uganda safari parks experience heavy rains with forest trails becoming muddy, slippery.

The best weather of the year is experienced from June, July & January to February. During these months, low rainfall amount is received while March, April and May are considered to be the worst months of the year. These are the peak wet/rainy months of the year in most parts of Uganda.

Regions in Uganda and when to visit

Uganda is a unique travel destination in Africa, featuring a breathtaking landscape. There are 4 major regions or circuits in Uganda each with distinct landscape and varying weather conditions. One of the least visited safari regions in Uganda is the Eastern safari circuit yet features unique attractions of its own.

The Central circuit/region- this is mainly composed of a large Lake Victoria that is shared by 3 East African Countries- Uganda, Rwanda and Tanzania. Other amazing attractions and activities worth enjoying while on Uganda safari in the Southern circuit include the Victoria Nile River, Entebbe Botanical Gardens and more. This area is best to visit from June, July, August/December, January, February.

Where to go for Wildlife Tour in Uganda?

Elgon National Park is a stunning park located in Eastern Uganda and protects the extinct volcano- Mount Elgon. This 1121sq.kms park lies on Uganda side and a portion of it is found in Kenya. Mount Elgon is 80kms diameter, featuring the widest caldera on earth.

Mount Elgon National Park has unique attractions including caves such as Makingeny, Ngwarisha, Chepnyalil and Kitum cave. The caves within the park feature salt attracting a huge concentration of elephants to lick it hence offering excellent view of these interesting mammal species.

There is a list of about 300 bird species to look out for while in Mount Elgon National Park. These include Jackson’s francolins, white starred forest robin, mash widow bird, lammergeyer, alpine chat, black collared apalis, hunters cisticola and others.

Located in Western Uganda, Queen Elizabeth National Park is a must-visit destination for magical wilderness experiences. The park occupies 1978sq.kms and taking its name after Queen Elizabeth of England, expect to see a huge profusion of savannas and forest wildlife species.

Mgahinga Gorilla National Park is compact in size, occupying only 33.7sq.kms of land area in Southwestern Uganda. This is set within the Virunga Mountain ranges and inhabits golden monkeys and endangered mountain gorillas. The 33.7sq.kms park is famous for golden monkey tracking, Batwa trail experience, mountain gorilla trekking, birding, hiking and others.

Kibale National Park & Semuliki National Park are ideal chimpanzee tracking safari parks in Uganda. These are located in Western Uganda and they protect more than chimpanzees as there are several birds, primates and more.