The Great Wildebeest Migration is one of the most remarkable shows on Earth and often referred as the “World Cup of wildlife”, never to be missed by nature and wildlife fanatics. This movement is an annual cycle that involves millions of iconic animals across the Serengeti-Mara Ecosystem in East African Region. 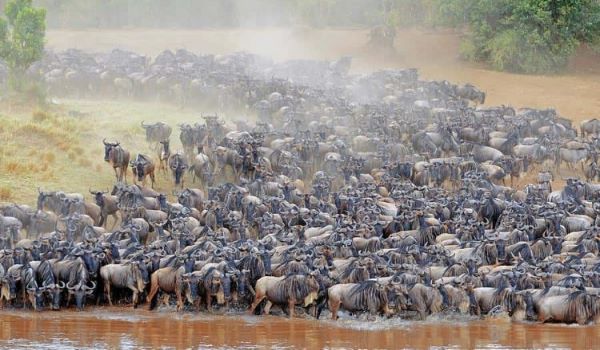 The continuous migration of significant populations of wildebeests, accompanied by a number of other animals travel through an old tradition while searching for fresh pastures for grazing and plentiful clean water.

The main animals during this migration are wildebeests (over 1.5 million), although they aren’t the only ones but go along with gazelles (over 300,000) and zebras (over 200,000 individuals) as well as impalas, Topis and other antelopes.

This migration follows a cycle that usually begins with calving within the southern side of Serengeti National Park (in Tanzania), a stone throw from Ngorongoro Conservation Area then they make a journey through the sweeping Serengeti plains up and about in a clockwise direction towards the stunning Masai Mara National Reserve in Kenya.

These animals thereafter make a return trip back to Serengeti towards the end of the year. The spectacles and drama that happens along the way during the migration such as fighting away predators are worth capturing on camera and creating lifetime memories.

Great wildebeest migration is simply understood as the most significant herd movement of animals on Earth, involving about 1000 animals per square kilometers, with the greatest population being wildebeests.

What makes the movement more exciting is the presence of hungry predators such as spotted hyenas, lions, Crocodiles, African wild dogs, leopards and cheetahs that battle against migration animals hence being referred as the “greatest show on Planet”. 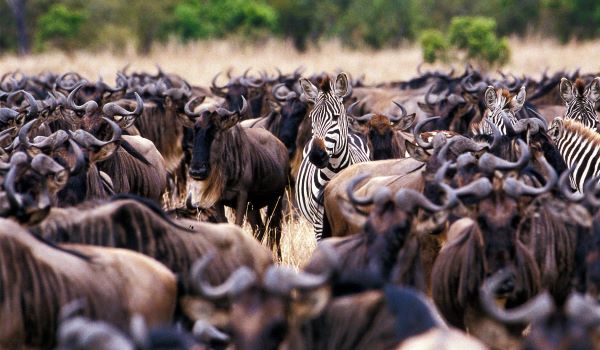 This circle leads animals from spectacular Ngorongoro Conservation Area (not particularly within the Crater) within the southern side of Serengeti National Park in north-eastern Tanzania into Kenya’s Masai Mara National Park and back again, then the cycle goes on and on each year.

While travelers enjoy views from the Great wildebeest migration, it comes along with dangers (on side of animals) as vulnerable calves get snatched by different hungry predators.

For this reason, the animals only consume what they are accustomed to hence reducing competition and the different grass species within the plains of Serengeti-Mara ecosystem are rich in protein and calcium.

It’s extraordinarily funny and still unknown how these animals know which way to go each year, without changing direction but it is said that their movement is greatly determined by the response to prevailing weather conditions.

It is believed that the wildebeests go after rains as well as blooming of new and fresh grasses. Some say the animals are responding to thunderstorms and lightning, although there is still no scientific evidence of this theory.

The Great wildebeest migration happens in different phases that include January to March, April to May, June to July, August to October as well as November to December.

Wildebeest Migration from January to March

From January each year, the cycle of movement is ending southwards while animals go along the Eastern boundary of Serengeti National Park and towards Ngorongoro Conservation Area.

During this time, the Savannah plains are still rich in succulent grass thus giving these animal herds with the most favorable condition for bring forth life and even raising their newborn calves.

While there is no clear start and end to this movement cycle, apart from birth and death, it is evident that the calving season is the beginning of the Great wildebeest migration.

Usually, about end of January or early February, animals herds inhabit the short and sparse grass plains that extend towards the lower northern slopes of stunning Ngorongoro Crater highlands as well as adjacent to the Olduvai Gorge. During this time, more than wildebeest calves are brought to life in 2-3 weeks (approximately 8000 calves each day).

The high concentration of weak calves means that the nearby hungry predators also swing into action. Given the large numbers of wildebeests including young calves, it becomes easier to hunt.

The Great Wildebeest Migration from April to May

After the little ones are born, the wildebeest herds begin moving northwest to enjoy the succulent grass in Central part of Serengeti National Park, leaving along with zebras as well as small concentrations of antelopes. By the end of May, a number of wildebeests will have migrated for a number of kilometers while converging at the Moru Kopjes.

A number of Safari Camps reward visitors with breathtaking views during this time and they include Dunia Camp in Serengeti National Park.

By the end of May, mating starts as male wildebeests start battling head to head. Slowly the movement starts gaining momentum while the animals begin to move in large numbers within the Serengeti western Corridor.

This also involves crossing of Grumeti River while continuing with the journey. However, this River crossing is not as spectacular as Mara crossing as there are fewer crocodiles.

The Great Migration from June to July

The dry season surprisingly begins in June and therefore travelers should expect one of the largest populations of wildebeests in western Serengeti as well as the tranquil banks of River Grumeti.

Every animal taking part in this migration has a great challenge ahead and this is crossing the crocodile-infested River, although not as savage as Mara River in Masai Mara National Reserve.

At the start of July numerous wildebeests and zebras proceed northwards along the western boundary of Serengeti National Park towards another huge obstacle.

Visitors staying at Sayari Camp and the Mobile Migration Camps offer the best views during this time of the year while visitors in Masai Mara’s Rekero Camp rewards travelers with the best views of Talek and Mara River crossings.

The Remarkable Wildebeest Migration between August and October

In the beginning of August, wildebeest herds are concentrated on the northern area of Masai Mara National Reserve in addition to being faced with the biggest challenge of crossing River Mara. 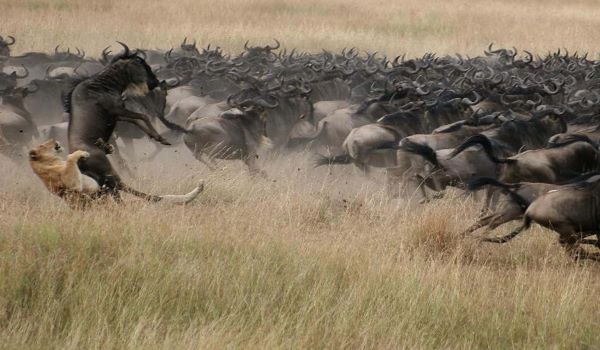 The high speed of the River, the panic and uncertainty of River crossings, added by the eagerly waiting predators (lions and crocodiles) as well as changing currents are likely to cause huge loss of life.

While the crocodiles wait in the waters, lions and leopards are patrolling at the banks, ready to capture unsuspecting wildebeests that make way to the banks.

By September to October, the animals have successfully crossed eastwards but will return to face the Crocodiles while heading back to Serengeti National Park.

The fulfilling Great wildebeest Migration from November to December

After the short rains of October to beginning of November, the wildebeest herds start leaving Kenya to the eastern edges of Serengeti National Park, beyond the stunning Namiri plains where the highest cheetah population is sighted.

The animals arrive the Eastern and Southern boundaries by December. This cycle then starts afresh with the onset of calving in January to March. 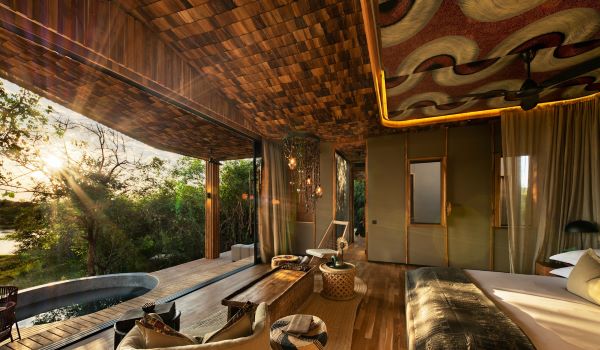 This safari allows our visitors to explore the crème de la crème of safari destinations in these two popular Safari countries. Spending whole 11 days browsing through the wilderness of two African countries that are known for offering remarkable… View Tour

This is an extended trans-border adventure safari that focuses on the top destinations in these four East African Countries. They include Murchison falls, Kibale Forest, Queen Elizabeth and Bwindi Impenetrable National Parks in Uganda, Serengeti… View Tour