Masai Mara National Reserve Animals; The reserve is one of the places in Africa that doesn’t need an introduction, as far as wildlife viewing is concerned. Along with the wide array of safari adventures that this epic destination in southern Kenya has to offer safari nature enthusiasts, there is one experience that will make you fall in love with the Reserve and the country in general. 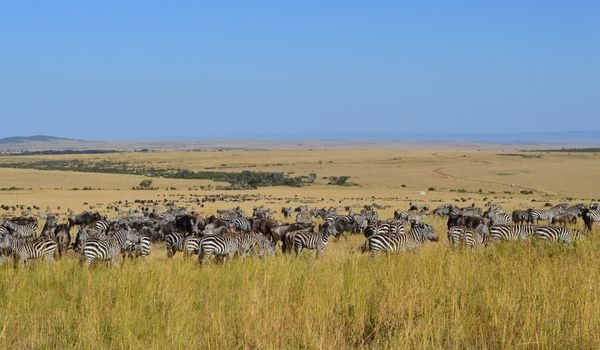 While uncovering the raw beauty of Masai Mara National Reserve, you might not be searching for the animals, but surprisingly, the animals will find you wherever you are (even at the comfort of your Safari Camp) throughout your visit.

As you relax at your Safari Camp and watch elephants and Cape buffaloes roaming around nearby watering points or hear the sweet melodies of chirping birds around the Camp, the Masai Mara Reserve animals will leave you breathless and make your African safari unforgettable.

Masai Mara is a renowned safari destination in Africa, sitting on the southwestern side of Kenya, and boasts of a stunning expanse of rolling savannah plains that extend for over 1510 square kilometers. It borders Tanzania’s Serengeti National Park, and together are ground for the popular annual wildebeest migration.

Masai Mara National Reserve’s diverse landscapes, as well as beautiful natural wonders, have made it possible for over 90 mammal species, several reptiles and Amphibians, and about 500 bird species to call home. Therefore, allow us to introduce you to the spectacular Masai Mara Reserve animals that include;

If no one has ever told you this, get it from us today that Masai Mara National Reserve is one of the best places to sight the big five game in the wild. It is also for this reason that thousands of travelers flock to the popular safari destination. These animals are Rhinoceros, lions, leopards, Cape buffaloes, and elephants, and a typical 4-day trip to the Reserve will guarantee to see all these animals.

Scientifically known as Panthera Leo, Lions in Masai Mara range between 800 and 900 individuals hence making them one of the Reserve’s must-see animals. 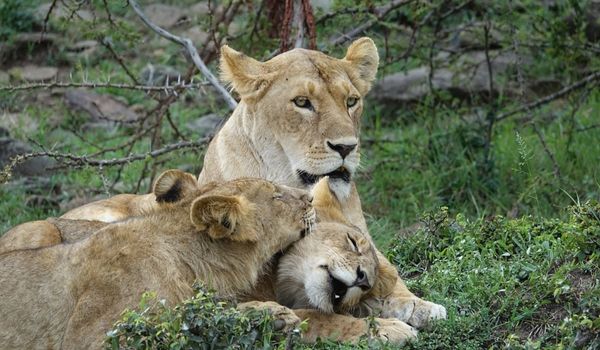 Here, you will discover the interesting lifestyle of these big cats which includes males holding territories between 30 and 400 square kilometers while lionesses (females) head out for hunting.

You will see the iconic Black Rhinos that are known for being smaller and more aggressive than the white Rhinos (found in Lake Nakuru National Park). The Black Rhinos frequently use their horns while fighting and defending against predators as well as mating. Discover more about them by booking your Masai Mara safari with Hail Tours Uganda.

Loxodonta Africana, elephants are the most popular Masai Mara Reserve animals and these creatures being the largest land animals makes them every traveler’s must-see attraction. 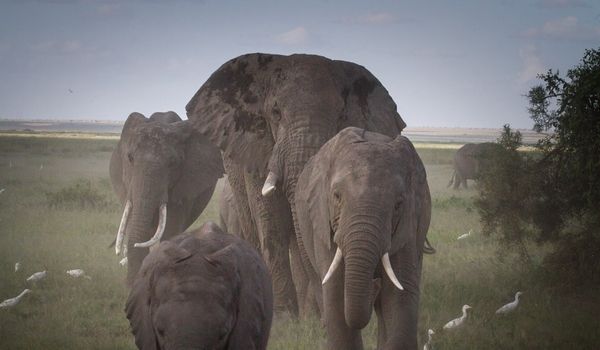 These animals are one of the most intelligent and familial species but have been victims of poaching due to the high demand for their ivory.

Also known as Panthera Pardus, Leopards are also a must-see in Masai Mara National Reserve and one of the most elusive species. These big cats are generally shy and love hunting at night hence the best time to see them in large numbers is during the night game drives.

Known as the most dangerous animals, African buffaloes (Syncerus caffer) are also found in Masai Mara National Reserve. They live in herds of sometimes up to 100 individuals and have an interesting lifestyle that will blow your mind.

In addition to the traditional big five game (lions, leopards, Rhinos, Buffaloes, and elephants), the cheetahs, Hippos, giraffes, and zebras join the list to form the big nine animals. The beauty of Masai Mara National Reserve is that you can see all of them during your game drives.

Another extraordinary Masai Mara Reserve animal is the zebra (Equus quagga) and you will specifically see the Plains zebras.

The Masai Mara National Reserve is home to the “Masai giraffes”, one of the giraffe sub-species. They are known for their remarkable heights and graceful movements. 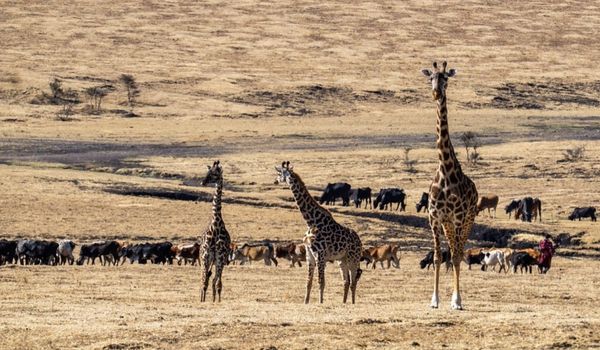 They are considered endangered according to the IUCN red list with about 33,000 individuals in the whole country.

Masai Mara National Reserve is also home to the fastest land animal-cheetah (Acinonyx Jubantus), also known for hunting in the open. While travelers normally mistake them for leopards, cheetahs are longer and slightly lighter in the body. Cheetah faces are smaller and rounder, with oval-like spots while leopards have rosettes (rose-like markings).

Any trip to Masai Mara Reserve without sighting the Hippopotamus is incomplete because they are a must-see. They are the 3rd largest land animals that weigh up to 1500 kilograms and live around Lakeshores, swamps, and Rivers, owing to their delicate skin that requires cooling most time.

Also known as gnu, wildebeests are members of the antelope family but are worth seeing in Masai Mara National Reserve due to the legendary annual wildebeest migration. 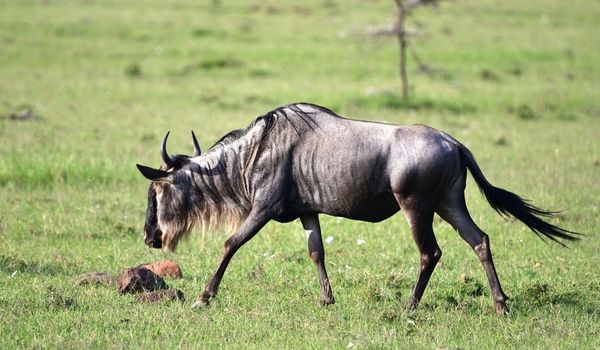 They usually form large herds in the Serengeti-Mara ecosystem of Kenya and Tanzania and live in the open woodlands and open grassy plains.

Scientifically known as Orycteropus afer, Aardvarks are tinny to medium-sized burrowing mammals characterized by long snouts as well as powerful claws. These creatures are native to Africa and one of Masai Mara Reserve’s animals. Their bodies are hairless and back arched with short legs.

Also known as Proteles cristatus, Aardwolves are interestingly insectivorous carnivores that are native to the Eastern and Southern African regions. They have a marked yellowish body with vertical black stripes and a bushy black-tipped tail that makes them a lot like a small striped hyena.

African hares mainly occupy the savannah grasslands and woodlands throughout of Africa, Masai Mara National Reserve is one of them. These mammals live solitary lives, although they sometimes make small groups of two or three individuals when foraging and use their remarkable senses of smell, hearing, and sight to avoid predators.

Masai Mara National Reserve is one of the places to see different antelope species that include the impalas, giant elands, Defassa waterbucks, Oribis, Kirk’s Dik-diks, Topis, Coke’s hartebeest, bushbucks, Klipspringers, and others, which all exhibit unique characteristics and behavior.

Banded mongoose (also referred to as Mungos mungo) are common in the East and Central African regions and their natural habitats are open forests, woodlands, and savannah grasslands. These creatures are brown or grey in color with dark bands across their backs, stretching from shoulder to their tails.

The dwarf mongoose is different from the Banded Mongoose, living in the Savannas, thickets, and woodland. Being one of the two social species of mongoose, they live in family groups of two to twenty individuals comprising of more females than males and inconsistent numbers of infants.

These species of fox occupy the short-grass prairies as well as the arid grasslands of Africa. Their bodies are generally yellow-brown with pale throats and underparts. These are one of the rarely-spotted animals in Masai Mara National Reserve.

Also referred to as Senegal Galago, Bush babies are one of the interesting Masai Mara Reserve animals. They are small arboreal and nocturnal primates with big round eyes that aid night vision as well as exceptionally fine hearing ability. They are also characterized by strong back legs that allow them to jump more than 5-6 feet in a vertical direction. 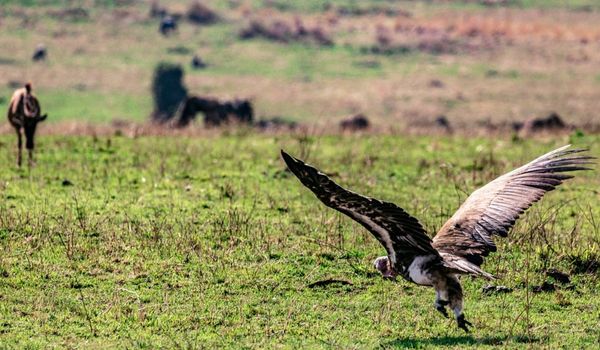