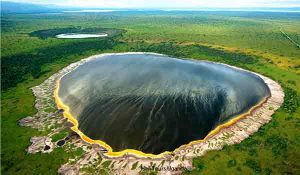 Queen Elizabeth National Park is located in Western Uganda with 4 districts all surrounding it including Rubirizi, Rukungiri, Kasese and Kamwenge.

Queen Elizabeth Safari Park sits on the elevation range of 884-1337m, lying on the Great Rift Valley Area. Due to its strategic location, Queen Elizabeth Park is an amazing Uganda safari park with distinct landscape that is characterized by unique vegetation zones.

The park’s vegetation cover is comprised of acacia woodlands, savannas, forests and swamp. Besides, there are strikingly stunning Crater Lakes worth exploring on your next Uganda safari tour.

The peninsula overviews the scenic Katwe bay of Lake Edward and features incredible tracks such as the Channel track that connects up to Katunguru park gate and extends up to Kabatoro gate. Mweya peninsula is known for its incredible leopard views and other wildlife species.

Extending up to 32kms, Kazinga Channel is a natural channel within Queen Elizabeth National Park that connects two Lakes; Lake Gorge in the East and Lake Edward to the West.

The 32kms long channel is a home to a huge profusion of hippos, Nile crocodiles, water birds and other wildlife species. The channel is perfectly explored on a boat or launch cruise in the morning or afternoon.

Kyambura Gorge- famous as ‘Valley of Apes’ lies within Queen Elizabeth National Park in the extreme Eastern side. The gorge is 1kms across and 100m deep, hosting diversity of wildlife such as primates, birds and more.

Kasenyi Plains or sector is positioned in the Northern side of Queen Elizabeth NP 48kms South-east of Kasese. This is an area with vast savanna grassland and often explored by majority of Uganda safari travelers on a game drive or wildlife viewing. The sector is blessed with diversity of wildlife including lions, elephants, buffaloes, birds. 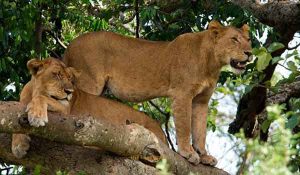 Other tourist sites worth visiting on Uganda safari in Queen Elizabeth include Maramagambo Forest which occupies the Kichwamba Escarpment. The natural forest is a home to diverse primates such as L’Hoest monkeys, chimpanzees, blue monkeys, black and white colobus monkeys, vervet monkeys and more.

The other important sites worth visiting on Uganda safari in Queen Elizabeth Park include The Equator and the Queen’s Pavilion; Lake George.

Over 620 bird species thrive within the beautiful Uganda safari Park including endemic birds, migratory, aquatic, savanna and others.

Chimpanzee tracking is an amazing primate safari experience Queen Elizabeth National Park has to offer the world. This is done in Kyambura Gorge where habituated chimp communities exist and you have a chance to see not only chimpanzees but also variety of other primate species such as olive baboons, blue monkeys, colobus monkeys, red tailed monkeys as well as birds.

QENP is famous for its outstanding guided game drive experiences. The park is open for game drives in the morning and afternoon, with a great opportunity to see diversity of wildlife such as buffaloes, lions, elephants, antelopes, warthogs, bird species and more.

Queen Elizabeth Park hosts a total of up to 620 bird species in various habitat making it one of the most visited birding sites. The birding sites in QENP include Katunguru bridge, Kyambura Gorge, Ishasha, Lake Katwe, Kikorongo, Maramagambo Forest, Kazinga Channel, Kasenyi and others.

The list of birds in Queen Elizabeth National Park is long but the must-see include shoebill storks, pelicans, flamingos, nightjars, kingfishers, papyrus gonoleks, sunbirds and more. 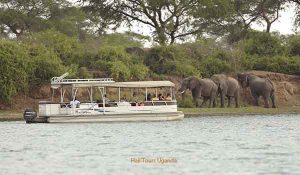 Boat cruise or launch cruise is one of the amazing recreational activities not to be missed in QENP. This is done along the 32kms long Kazinga Channel that links Lake George and Lake Edward.

Hot air balloon experience is a unique activity available and only conducted in Queen Elizabeth safari Park and Murchison Falls National Park for the case of tourists on Uganda safari. You enjoy a view of wildlife in the air rather than in a 4×4 safari vehicle.

Lion tracking is a distinct experience that lets you meet the Kings and Queens of the jungles while on Uganda safari in Queen Elizabeth National Park.

This is a great opportunity to learn how lions behave, feeding habits, take photos and more. Other tracking experiences Queen Elizabeth Safari Park has to offer include banded mongoose tracking and hippo counting.

Nothing lets you immerse yourself into the wild than a guided nature walk. Get to discover the different habitats, wildlife in Queen Elizabeth National Park closely on foot. The best nature walking areas in QENP include Maramagambo Forest, Mweya Peninsula, Ishasha River and more.

A cultural walk in Queen Elizabeth Game Park is enjoyable in the different local communities adjacent to it. This lets you explore the rich cultures, traditions and heritage, get entertained from the local dances, music performance.

Busongo fishing villages, Kasonga community among others are some of the best places that are worth visiting for cultural walk/experience.

When is the best time to visit Queen Elizabeth National Park?

Queen Elizabeth NP safaris are open all year round. The dry season is however noted to be the best for wildlife/game viewing and this takes place from June, July, August, September and December, January to February.

There are 3 important categories of accommodation in Queen Elizabeth National Park- budget, mid-range and luxury.

How to get there

By air, fly from Entebbe airport to Mweya or Kasese airstrips and you can be right at Queen Elizabeth National Park for your holiday.