Making Safaris to Kenya rewards intrepid magical Kenya safari goers the crème de la crème of what the African Continent has to offer. 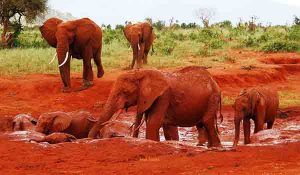 11 days Kenya and Tanzania Safari allows our visitors to explore the crème de la crème of safari destinations in these two popular Safari countries. Spending whole 11 days browsing through the wilderness of two African countries that are known for offering remarkable safari… 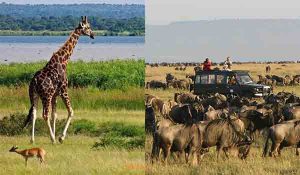 The 18 days African Safari to Rwanda, Uganda, Kenya and Tanzania Safari is an extended trans-border adventure safari that focuses on the top destinations in these four East African Countries. They include Murchison falls, Kibale Forest, Queen Elizabeth and Bwindi… 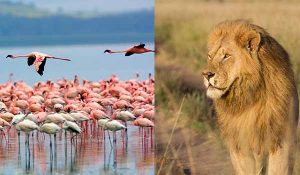 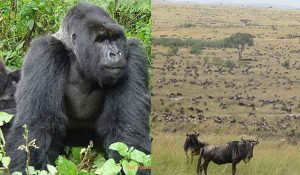 From the jaw-dropping and endowed Masai Mara National Reserve for its annual wildebeest migration, riveting cultures that make it a fabulous melting pot, its tranquil coastlines with secluded and tropical white sand beaches to its wide array of bird species. Get the chance to be in charge of your safari adventures as well as creating the most memorable experiences.

On simply mentioning Kenya, it is very easy to understand why numerous tourists (especially safari fanatics) flock this beautiful African country from across the Globe to have a thrill of the extraordinary African adventure in some of its premier safari destinations.

Kick-start your Kenya adventure in Nairobi-the bustling and thrilling City with a National Park in addition to exciting nightlife, iconic Museums and cultural centers and so much more. Relish the tranquil white sand beaches of Diani and experience the real African wilderness in Masai Mara National Reserve, Amboseli, Tsavo East and West National Parks among others.

The 5 Best Safaris to Kenya

Location and Geography of Kenya

Kenya is situated within the heart and soul of Africa, sharing borders with South Sudan, Ethiopia, Tanzania, Uganda and Somalia as well as the azure waters of the Indian Ocean to the extreme Eastern side. This is one of the picturesque countries on Earth, named after Mount Kenya (the second highest peak of Africa at 5199 meters above sea level) and is marked by the Great Rift Valley extending from the extreme North to the far south. Kenya also shelters the stunning Lake Victoria. 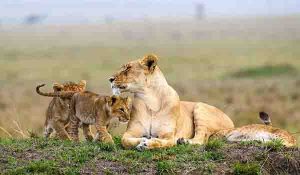 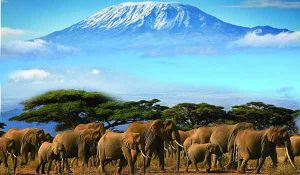 Thanks to its size of 580,367 square kilometers, Kenya is so far the 48th largest country in the whole World (about the size of Texas State and more than twice the size of Nevada State).

Highlights of Safaris to Kenya

To the extreme southern side of the country, at the backdrop of Tanzania’s Mount Kilimanjaro is the spectacular Amboseli National Park. This small Protected Area of only 392 square kilometers is a stronghold for its free-ranging elephants although visitors are also introduced to Hippos, wildebeests, Cape buffaloes, Masai giraffes, Grant’s zebras, lions, leopards, lesser kudu, Hyraxes and Dik-diks among others.

Visitors to the Central county of Laikipia are introduced to extraordinary Conservancies such as Ol Pejeta, where significant populations of Black and northern white Rhinos are found while adventurous travellers who are prepared for an adrenaline rush can take on Mount Kenya (through running, mountain biking or hiking/climbing).

In the extreme East of Kenya are tranquil white sand beaches of Lamu and Diani surrounded by the warm and azure waters of the Indian Ocean. This is where the holiday makers, vacation fanatics and visitors looking for unwinding escape to. Nairobi, the largest and Capital City of this country takes pride in being one of the largest Business Hubs with a spectacular savannah National Park at just a stone throw from the City Center hence making it the World’s only City with a National Park.

Kenya safaris are incomplete without its beautiful, welcoming and warm people belonging to about 44 Tribes. This therefore means that travellers are introduced to varying ancient traditions, local cuisines, cultural dances, traditions and visitors to popular places like Masai Mara National Reserve can get to interact with the Masai pastoralists while travellers to Samburu National Reserve will meet the Samburu people.

Best time to explore the beauty of Kenya

Kenya is open all year round for safaris but the best time to explore most of its attractions is June to October (traditional dry season) because it is when the Great Migration involving wildebeests, gazelles and zebras is at its peak in Masai Mara National Reserve. This season is also perfect for game drives as grasses are shorter and few watering points remain in the Park thus expect maximum visibility. However, if you are the kind of person that doesn’t enjoy huge crowds, then the rainy season is when you should travel to Kenya.