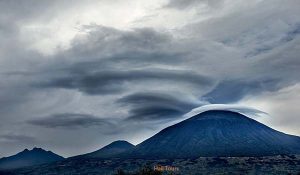 Volcanoes National Park the leading Rwanda tour destination takes its name from the chain of dormant Virunga volcanoes, five of which are all sheltered in this protected area alone- Muhabura, Gahinga, Bisoke, Sabyinyo and Karisimbi (4507m) which is the highest of all the 8.

Parc National Des Volcans is one of the oldest parks Africa has, founded in 1925 and occupies a compact land area of up to 160sq.kms. It is part of the extensive Virunga Conservation Area that also extends to include Mgahinga Gorilla National Park of Uganda and Virunga National Park of D.R. Congo.

Volcanoes National Park hosts up to 200 bird species mostly the Albertine rift endemic birds. The birds any enthusiastic birder should expect spotting on Rwanda tour in Volcanoes include;

To see Rwanda mountain gorillas, 13 gorilla families have been habituated and officially available for gorilla trekking. They include Titus, Amahoro, Agashya, Susa A, Karisimbi/Susa B, Sabyinyo, Hirwa, Kwitonda, Ugenda, Umubano, Bwenge and others.

Dian Fossey is remembered for her great conservation work particularly gorilla conservation and research in the Virunga volcanoes area. She settled at Volcanoes National Park conducting research for 18 years and fought strongly against poaching.

Unfortunately, in 1985, she was murdered and laid to rest near Digit the gorilla she so much loved. To facilitate her gorilla research work, Dian Fossey established Karisoke Research Center which can be visited while on Dian Fossey tomb walk.

Mount Karisimbi is the highest of the 8 Virunga volcanoes, rising up to 4507m and in Africa, it ranks 11th highest. This volcano is positioned on Albertine Rift and East African Rift Valley and it is amazing hiking to its submits.

Mount Visoke 3711m a dormant volcano in Volcanoes National Park is known for its scenic crater on the summits. It is found at the border of D.R. Congo and Rwanda, from Goma about 11kms away and just near Lake Kivu.

Gorilla trekking is Volcanoes National Park’s most enjoyed safari activity by most Rwanda safari holidaymakers. The park has many groups but currently, 13 of them are fully open for gorilla trekking and others are for research.

Each gorilla family in Volcanoes National Park is allocated to only 8 persons per day and a park guide takes tourists to look for mountain gorillas starting at 8:00am after briefing.

Gorilla trekking in Volcanoes starts at 8:00am lasting for 2-6 hours depending on visitors’ hiking speed. There is a guaranteed one hour to enjoy face to face with a family of these large apes, taking pictures.

Gorilla permits are required for anyone visiting Volcanoes Rwanda Gorilla Park for gorilla trekking and each permit costs USD1500. To book for one, reach out to reservation team at Hail Tours Uganda and due to high demand, we advise all our clients to book their permits early enough preferably 2 to 4 months before the actual date of visiting Rwanda to track gorillas.

Golden monkey tracking is second most treasured primate experiences Volcanoes National Park has to offer nature lovers on Rwanda safaris. This offers tourists a lifetime opportunity to strike their imaginations with the golden monkeys while in the wild.

Like gorilla trekking, golden monkey tracking in Rwanda Volcanoes National Park begins with briefing at Kinigi offices and the park has 2 troops for tourists to explore.

Golden monkey permits are a must-have if you planning to go golden monkey tracking and a single permit costs USD100 per person.

What to carry for Rwanda Gorilla Trekking/golden monkey tracking?

This Rwanda Gorilla Safari Park is a home to variety of Albertine rift bird species making it an exceptional birding destination.

Dian Fossey trail takes you through Dian Fossey’s gorilla conservation legacy. It is a 2-3 hours hike and comes with astonishing sights of birds, primate species and many other wildlife. Dian Fossey lived in Virunga region conducting research about gorillas for 18 years and she was murdered by unknown people.

Volcano climbing in Volcanoes Rwanda means even enthusiastic climbers/hikers are not left out.

Of 8 Virunga Massifs, all 5 are in Volcanoes National Park Ruhengeri including Karisimbi, Visoke, Gahinga, Muhabura and Sabyinyo.

Musanze cave trail introduces you into the long Musanze caves that extend up to 2kms and offers a thrilling walk. The caves are located in Musanze District and they can be visited before or after gorilla trekking in Volcanoes National Park.

Other than wildlife safari activities, there is also a chance for tourists to get the best of Rwandese cultures, traditions, enjoy dances, music performances and more. The best place to begin your cultural tour at Volcanoes National Park is Iby’Iwacu cultural village or gorilla guardian’s village.

After or before your gorilla trekking adventure in Volcanoes National Park, the Twin Lakes are among exceptional tourist sites any nature lover should expect visiting on Rwanda safaris.

Lake Burera and Lake Ruhondo are best explored while on a boat ride taking you to one of the stunning islands while spotting diverse birds such as weaver birds, African spoonbill, weaver birds to mention but a few.

Volcanoes Rwanda Park is open for visitor exploration at any month, week or day of the year. But to have the best of gorilla trekking or golden monkey tracking, the dry season is the best due to the favorable weather and climatic conditions it comes with.

In every year, there are 2 dry seasons- the short and long with short running from December, January to February and long dry months begin from June, July, August to September.

Visits to Volcanoes NP can still be made during the wet or rainy season. The park also records two wetter or rainy seasons- the long rains starting from March to May and short from October to November.

Where to stay- Safari Lodges and Camps at Volcanoes National Park

All categories of accommodation facilities are found in and around Volcanoes Rwanda.

Getting to Volcanoes National Park- Ruhengeri

Volcanoes National Park- Ruhengeri is easier to reach by road transportation due to its close location to Kigali Capital. It takes holidaymakers on safari in Rwanda 2 to 3 hours to drive up to Volcanoes Gorilla Park from Kigali.

Preferably, hire a 4×4 safari vehicle for your road trip and there is also an alternative of driving from Kabale/Kisoro in Uganda to Volcanoes Rwanda Park through Chanika or Katuna border. From Kisoro or Kabale, driving to Rwanda Volcanoes NP may take you 3-5 hours depending on your driver’s speed.