Visiting the final resting of the woman who dedicated and sacrificed her life to protecting the mountain gorillas is one of the activities undertaken during gorilla safaris in Rwanda. Dian Fossey was an American primatologist who embarked on mountain gorilla studies from 1967 until her death in 1985.

Dian Fossey was inspired to visit Africa after seeing different travelers returning from Africa and in 1966, she embarked on a journey that would see mountain gorilla numbers grow but also cost her life two decades later.

She was amazed by the sheer beauty of Mother Nature as well as the diversity of wildlife she sighted. She later developed an interest in studying mankind’s evolution hence meeting Dr. Richard Leakey, who instead encouraged her to undertake studies on the endangered mountain gorillas.

During her second visit to Africa, she decided to settle in Congo’s Virunga National Park but due to constant insecurity, she decided to move to Rwanda. She found refuge in Volcanoes National Park, where she set up the Karisoke Research Center on the foothills of Karisimbi and Bisoke Volcanoes.

She began studying about these Giant Apes and developed deep love and passion for them. During her time in Volcanoes National Park, she formed friendships with communities and mountain gorillas, became enemies with different individuals whose interests weren’t in mountain gorilla conservation.

Dian Fossey was found dead in her cabin on 25th Dec of that year and in subsequent years, the Dian Fossey Fund was established to continue her legacy.

How Hikes to see the Dian Fossey Tombs are done

The visit to Tombs of Dian Fossey, like most tourist activities in Volcanoes National Park starts with registration and briefing at Kinigi Park headquarters. 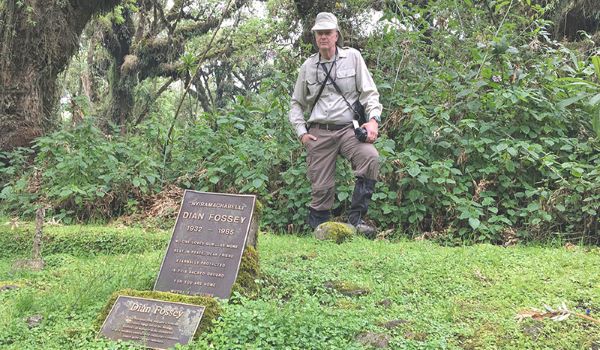 It usually starts in the morning with briefing on the dos and don’ts of the activity. Later at 8:00am, visitors hop into their safari vehicles for a 30-minute transfer to the trailhead at the base of Mount Bisoke.

A walking stick is provided free of charge at this point and visitors interested in hiring porters are also allowed to do so.

Here, beautiful mountain sceneries stretched from Rwanda to the neighboring Democratic Republic of Congo are enjoyed, together with lots of bird species, especially the ones endemic to the Albertine Rift Valley. Before long, you will be ushered to the Tomb of Dian Fossey, alongside her favorite gorilla Digit.

Start by walking outside the Park while taking in views of the countryside and Virunga Volcanoes, then approach the stone wall forming boundaries between the Park and surrounding areas but also keeping the big animals (buffaloes and elephants) from crossing into community farmlands as well as homesteads.

Slowly start hiking Mount Bisoke while passing through the area frequented by mountain gorillas and some Hail Tours visitors have been lucky to encounter these Giant Apes at this point.

The Park Ranger will give 10 minutes to see the mountain gorillas but no photography is allowed at this point. Besides mountain gorillas, other forest buffaloes, golden monkeys and duikers are commonly-sighted during this hike.

The entire Dian Fossey Tomb hike takes one to three hours depending on the pace of the slowest person and level of physical fitness.

How much does it cost to visit the Tombs of Dian Fossey?

It will cost you only $75 per person to buy a permit, which will allow you to visit the Tombs of Dian Fossey. However, this amount doesn’t include the Park entry fees, your accommodation, porter fees, transportation, and tips (Ranger, driver, and porters).

This money can be paid directly to Rwanda Development Board offices in Kigali or to the tour operator with whom you booked your trip.

Best time to visit the Tomb of Dian Fossey

The Tombs of Dian Fossey can be visited all year round but the dry season is always considered the best. During these months (January, February, June, July, August, September, and December), the hiking trails are drier, vegetation is scarcer hence making it easier to maneuver through while on the hike.

The wet season (months of March, April, May, October, and November) is marked by heavy rains which make hiking trails to be muddier, more slippery, and more challenging to walk through.

However, Volcanoes National Park has a generally mountainous landscape and vegetation is thicker hence rains are expected at any time.

You should always be prepared by wearing hiking boots, a rain jacket, safari hats, gardening gloves, a backpack, a long-sleeved shirt, and long trousers regardless of the weather. Also carry enough snacks and drinking water, a god camera, binoculars, insect repellant, and sunglasses.