Popular for being the home to the Great annual migration, there is something about Serengeti National Park that makes it magical and worth exploring during African safaris. 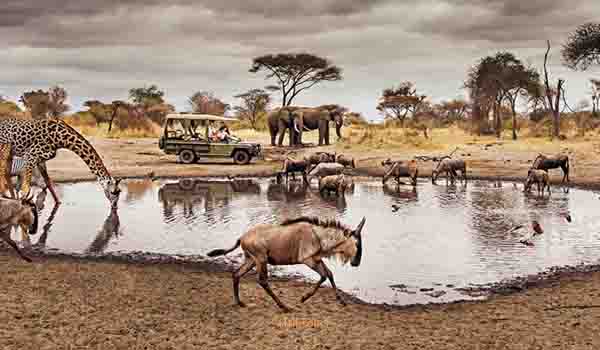 The possibility of experiencing whatever you dreamt about Africa is higher in this Tanzanian Protected Area than any other place. Surprisingly, innumerable wildlife films and documentaries have been shot/recorded in Serengeti National Park and it’s all for a good reason.

This is one of the places where visitors can witness millions of migrating wildebeests alongside gazelles and zebras over the vast acacia plains. Not only that, the Park is the cradleland of human life and undoubtedly the closest to unblemished African wilderness you can ever get.

Visitors to this Protected Area agree that it is where time stands still regardless of millions of wildlife continuously on the move.

The incredibly large Serengeti National Park extends for over 1,476,300 hectares within the northern part of Tanzania. It is found within the Eastern Mara region as well as the north-eastern side of Simiyu region with virgin savannah.

On the name of the Protected Area, it was named “Serengeti” from Masai word “Siringet” to mean an “area where the land runs on forever”, owing to its sweeping savannah plains. Before becoming a National Park, the area first became a Game Reserve in 1930 within the south and East Serengeti with about 228,600 hectares.

In this particular year, the Government (then Tanganyika) came up with a system of National Parks that are acquiescent with the “Convention relative to the Preservation of Fauna and Flora within their original state” The “National Park” status was gained in 1940 and this meant eviction of Masai pastoralists that occupied areas within the demarcated Area. The boundaries of the Park were completed by 1951 and it was designated a UNESCO World Heritage Site in 1981.

The wildebeest migration is another outstanding attraction within Serengeti National Park and involves millions of wildebeests, zebras and gazelles northwards towards Masai Mara National Reserve in Kenya.

Antelopes such as impalas, common elands and Topis also join the migration and white it is a spectacle worth seeing; these animals move annually to search for fresh pastures and clean water.

This is a never-ending cycle, during which animals move around the Serengeti-Mara ecosystem in a seasonal pattern, dictated by rains and grass nutrients.

The beautiful of Serengeti National Park is mainly characterized by grassland plains to the southeastern side while the northern side is mainly rocky and hills and the west is filed with Valleys, dense forest and Rivers. The area is also dotted with Kopjes occupied by cheetahs and leopards while the granite outcrops rise above the savannah plains.

Whether you are using a private self-drive vehicle or Camp cars to Serengeti National Park, one thing you should never miss is at least booking a guided game drive. 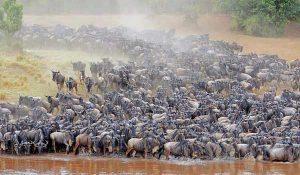 The experienced tour guides are well conversant with the wilderness and communicate with each other hence know where to get the highest number of animals.

Exceptional on many bucket lists is a hot air balloon tour. Who wouldn’t want to swirl through the direction of the wind while watching huge herds of unique animal species? Discover the interesting landscapes-hills, forests, woodlands and savannah plains with their exceptional animal species.

It is worth visiting and learning the unique lifestyle of the people who have lived within the area for centuries, even before it was gazetted into a National Park.

Walking safaris in Serengeti National Park are conducted with armed Rangers and experienced guides to discover the hidden treasures of this magnificent Tanzanian safari destination. With this activity, travellers are assured of seeing small and hidden creatures that are possibly not seen during game drives.

There are many bird watching trails inside Serengeti National Park where visitors go through different landscapes-forest, granite rock outcrops, woodlands and savannah to see the different avifauna species that call the area home.

Best time of the year to explore the beautiful Serengeti NP

Over 1.5 million wildebeests, 300,000 gazelles and 200,000 zebras migrate from the northern hills of Serengeti National Park to the southern plains of Masai Mara National Reserve for the short rain, every October and November then continue to move westwards and north after the long rains within March, April and May.

These are obviously wet months hence the best time to experience the peak of wildebeest migration is the rainy season. However, travelers that wish to add game viewing can do so during the dry season-June to September and December to February when animals gather around watering points.

Best places to stay during tours of Serengeti National Park

When you talk of places to stay in Serengeti National Park, you will undoubtedly be spoilt for choice. There are luxurious, midrange and budget Safari Camps/Lodges inside or around the Protected Area.

Getting to the spectacular Serengeti National Park

Flying from Kilimanjaro International Airport/Arusha Airport is the fastest way to get to Serengeti National Park via any of the nine airstrips (Seronera, Kogatende, Sasakwa, Lobo, Ndutu, Kleins, Kusini, Kirawira and Grumeti Airstrips).

A long drive from Arusha Town to Serengeti National Park takes 5-7 hours for a distance of 350 kilometers. Using a comfortable 4WD Vehicle leads travellers to any of the Park gates-Ndabaka, Naabi Hill Gate, Bologonya and Klein’s Gate among others.