Spanning 829200 hectares of sweeping highland plains, savannah grasslands, woodland and forests is the stunning Ngorongoro Conservation Area in Ngorongoro District. It is also about 110 miles west of Arusha City, within the endowed Arusha region of the Crater highlands geological area.

The Ngorongoro Crater derived its name from the Masai pastoralists, after the “ngoro ngoro” sound made by the cowbell. Fossil evidence within the area shows that a number of hominid species lived within the region for more than 3 million years and are specifically found in the Olduvai Gorge area. 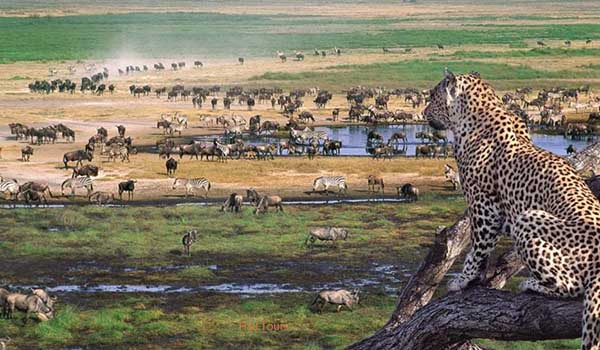 Before becoming a Protected Area, the region was occupied by hunter-gatherers for thousands of years, followed by the Mbulu who arrived about 2000 years ago and afterwards the Datooga about 1700. These two groups were unfortunately evicted from the region by the Maasai pastoralists in the 1800s.

The first European-Oscar Baumann arrived in the area around 1892, followed by two German brothers (Friedrich and Adolph Siedentopf) who undertook agricultural activities in the area until the onset of First World War, after renting the land from German East African Administration.

These two brothers would organize shooting parties from time to time as a way of entertaining their German associates. Given their zeal towards farming, they even tried to drive away the gnu (wildebeests) herds away from the Ngorongoro Crater.

The first Game Preservation decree was made in 1921, limiting hunting activities and in 1928, the activity was totally banned around the Crater edge, with exception of former farms of Siedentopf brothers.

The National Park law led to the creation of Serengeti National Park in 1951 thus causing constant troubles with the Masai pastoralists as well as other surrounding tribes and this subsequently led to the establishment of Ngorongoro Conservation Area in 1959. The region was designated a UNESCO World Heritage Site in 1979, for its rich wildlife diversity and uniqueness.

Beautiful and unmissable things to see in Ngorongoro Conservation Area

Other animals in the area are East African wild dogs, African leopards, cheetahs, serval cats, lions and many others. Areas far from the Crater are notable for spotted hyenas, jackals, Bohor reedbucks, black-backed jackals, bushbucks and so much more.

Ngorongoro Crater, the largest inactive, unfilled and intact Caldera in the whole World is another wonderful attraction within Ngorongoro Conservation Area. This beautiful feature came into existence from huge volcanic eruption which led to the collapse of Lava into the Crater.

This is believed to have happened about 2-3 million years ago and presently the Crater extends for over 100 square miles as well as 2000 feet deep. This Crater is interestingly one of the 7 natural wonders of Africa.

For any visit to Ngorongoro Conservation Area, don’t miss exploring Olduvai Gorge, a popular archeological site known for being the seat of mankind, following the discovery of Homo habilis species. This attraction is marked by a steep-sided gully within the Great Rift Valley that extends along the East African region.

This stunning 50-kilometer tourist site is found in the East of Serengeti Plains of Northern Tanzania and is one of the renowned pre-historic sites of the World. The first individuals to have dug the area were Louis and Mary Leakey in early 1950s.

Set within the southwest of Ngorongoro Crater, Lake Magadi is another breathtaking attractions within this popular Protected Area and is frequented by numerous lesser flamingos.

Game drives through Ngorongoro Conservation Area and towards the Crater rim are for visitors who wish to discover the wide beauty of the Area’s flora and fauna up-close. Enjoy morning, afternoon and night game drives lasting 3-4 hours in the company of expert Park guides to learn about the unique fauna and flora of this beautiful Protected Area.

The activity is normally done on foot, in the company of armed field guides for safety and lead towards the areas of Lake Eyasi, the Crater rim and other stupendous Craters in the heart of the Protected Area. Come across different animals and birds during the walking safari.

Discover the origin of humankind

The journey of discovery to Olduvai Gorge starts from Ngorongoro Conservation Area and is conducted under the guidance of experienced Park guides. The Gorge extends for 50 kilometers and is characterized by a steep-sided ravine in the stunning Great Rift Valley area. You will discover fossils that are as old as 3 million years within the area.

Ngorongoro Conservation Area alone has a list of more than 500 bird species, some of which are not found in other places within Tanzania.

The best wildlife photography and documentaries are shot in Ngorongoro Conservation Area. The beautiful landscapes roamed by animals provide the perfect backdrop for photography during Tanzania safaris.

Another riveting tourist activity undertaken by visitors to Ngorongoro Conservation Area is visiting nearby Masai villages/communities where travelers get the first-hand information on their mind-blowing culture and traditions, dress code, listen to ancient stories as narrated by village elders, purchase some of their art and craft souvenirs in addition to tasting their finger-licking dishes.

Phenomenal sleeping options within or around Ngorongoro Conservation Area

Sleeping options in or around Ngorongoro Conservation Area range from budget to luxury category and these include;

The luxurious Ngorongoro Crater Lodge is the main place of stay for visitors exploring this beautiful Protected Area, featuring three secluded Safari Camps. The Tree Camp has 6 suites, the North Camp features 12 suites while the South Camp has 12 suites. Each of these suites has a private wooden viewing deck, wide seating area, bedroom, furnishings in form of chandelier, hand-crafted wooden structures, to mention but a few.

When is the best time to explore the beautiful Ngorongoro Conservation Area?

While Ngorongoro Conservation Area is open all year round to all kinds of visitors, the dry season-June to August and December to late February is considered the best for spotting numerous wildlife species, converged at the Crater floor.

This beautiful Protected Area is only 173 kilometers from Arusha Town through smooth and well paved road that leads to Loduare Gate, close to Karatu Town. Additionally, travellers from Serengeti National Park connect to Ngorongoro Conservation Area via Naabi Hill Gate.

Flights can also be chartered from Arusha Airport to the Airstrip at the Ngorongoro Crater rim, just a stone throw from the Headquarters.