The elusive shoebill stork are one of the unmissable bird species during Hail Tours birding trips in Uganda. Scientifically known as Balaeniceps rex, these birds are also referred to as the “whalebill”, “whalehead” or the whale-headed storks. 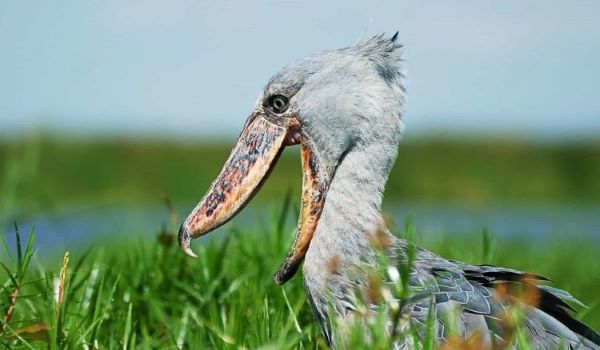 Like their name, these stork-like birds have a huge shoe-shaped bill, which makes them exciting to be seen by birding visitors.

These birds are characterized by a somewhat stork-like appearance and for this reason, they were initially classified in the same order (Ciconiiformes) as the storks.

However, years of genetic studies discovered that they actually belong to the Pelecaniformes order with Cormorants, Herons, and pelicans. They are known to be solitary and are capable of staying still for an extended period of time, in addition to moving slowly.

You may like: 1 Day Mabamba Birding Tour for shoebill stork watching

Physical Appearance of a Shoebill

Shoebill stork are one of the tallest birds you will ever encounter during birding tours and extend between 43 and 55 inches (110 to 140 centimeters), and some have been discovered to grow until 152 centimeters.

For body length (beak to tail), these stunning birds extend from 100 to 140 centimeters with a very remarkable wingspan of 230 to 260 centimeters.

Shoebill storks’ maturity can be identified from the feather color, whereby adults are mostly blue-grey with slaty-grey flight features whereas juvenile feathers are darker-grey with a brown tinge. 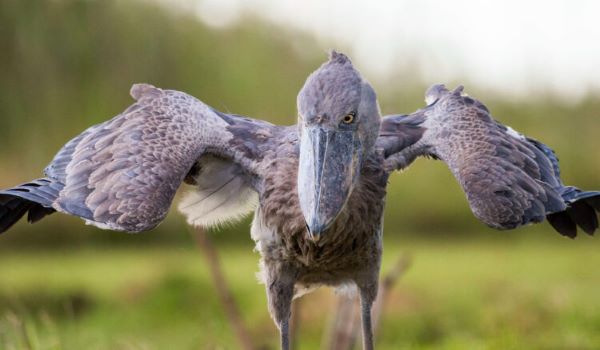 Shoebill storks are mostly found within large freshwater wetlands of the Central tropical African region ranging from South Sudan, areas of Uganda, the Democratic Republic of Congo, western Tanzania, Rwanda, and the Northern side of Zambia.

Shoebill storks are primarily piscivorous (carnivorous and feed on mainly fish), although they are also known for preying on a wide range of wetland invertebrates. It will also interest you to know that shoebill storks sometimes feed on hatchlings (young ones of crocodiles).

Given the solitary nature of these magical birds, it also has an effect on their breeding behavior. In their natural habitats, shoebill storks have been discovered to make less than three nests within each square kilometer. 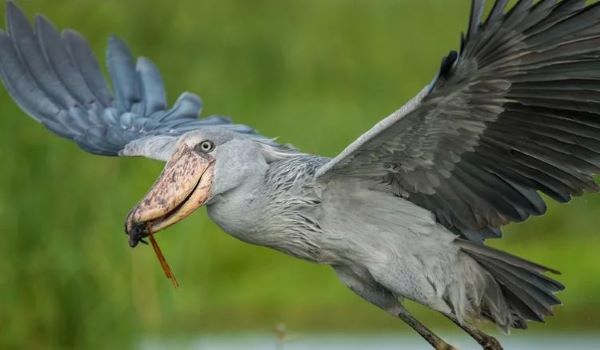 This is very different from the pelicans, herons, and cormorants that usually make nests in colonies. Each breeding pair strongly defends its territory of two to four square kilometers, making it different from its conspecifics.

In some places of their natural habitats, shoebill storks nest close to the end of the wet season to allow their eggs to hatch around the start of the next wet season.

Both male and female shoebill stork participate in nest building which is usually done on floating areas, after clearing an area of about 3 meters across the area. Interestingly, some of their nesting areas are submerged in water (about 3 meters deep).

While two to three chicks can be hatched, shoebill stork hardly raise more than one chick because most of them die. It is for this reason that shoebill storks are still considered vulnerable (according to IUCN Red List).

During the breeding season (in the wet season that falls from March to May), shoebill storks form monogamous partnerships. While the females lay at least two eggs, the incubation (lasting up to 30 days) is done by both males and females.

Their breeding will excite you, as smaller and younger chicks normally die and are used as backup when the older and stronger chick dies or is weak.

Best months of the year for seeing the Shoebill stork

Shoebill storks in Uganda and Rwanda can be sighted all year round, but if you desire to see their beautiful chicks, then you should consider visiting the mentioned Areas (Mabamba, Murchison, and others) during the wet season because it’s the climax of their breeding.

However, it is important to prepare for abrupt rain showers by carrying rain jacket, hiking boots, wide-brimmed hat and a waterproof backpack.